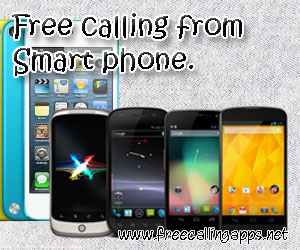 Mobile phone is an essential element in our daily life and we can’t imagine a life without this small device. From the beginning of this century , mobile penetration rate was increased rapidly. The functions of early form of the mobile handsets are limited such as make and receive phone calls and text messages. As part of technology development mobile handsets are changed their features and facilities. The Nokia company introduced popular smart phones and later lots of other companies created smart phone revolution in the market. Nowadays, smart phones become very popular because that are affordable to everyone and that loaded lots of fun, entertainment and communication features.
Smartphones are available in different operating systems and brands. Each of them have their own features and specifications. You can make free calling from smart phone with free applications. So many applications are available on app stores for making free calling from smart phone. Most of these applications need same software on both side. All of these programs are multi platform supported and you can call to anybody using same program in computer or tablet computers.We are introducing in this artcle about different types of smart phones and, which applications helps you to make free calling from smart phone.

iPhone is the leading smart phone of Apple company. The operating system of iPhone is iOS , developed by Apple company exclusively for iPhones and Apple devices. Apple  always keeping the quality and perfection of iPhone , they only  makes both the hardware and the operating system for iPhone and  everything is designed to work together. These are the main reasons for the iPhone keep the top rank always in the market. For free calling from smartphone, iPhone is the best choice for you. All applications which provides  free calling from smart phones available on Apple App Store Face time is the  exclusive communication program of iPhone and other iOS devices.  FaceTime  program integrated with  all new iPhone models ,you can enjoy free video and voice calls from your iPhone to other iPhone or other iOS devices via this excellent application.
You can read the brands which support free calling from iPhone , click on brands to get more details.
Skype, Wechat, Rebtel, Viber, Paltalk, Yahoo Messenger, UppTalk, Tango, Talkatone, Rounds, ooVoo, nanu, maaii, Nimbuzz, Line, Libon, imo, icq, hike messenger, Google Hangouts, Fring, Facebook Messenger, Dingtone, Dingaling, Bigo, BBM, Vippie,  coco, talkray, MO+, Kakao Talk, FreePP and airtel Talk.

A big number of people still using Symbian smart phones even that disappeared from the market.
Free calling from smart phone powered by Symbian is possible but not few apps only available.
The mobile app developers are currently not interested to make new apps in this format, the reason is simple , Symbian smart phones unavailable in market.

The Nimbuzz and Fring are only applications which available for Symbian smart phones for making free calls.

Fire Phone is the smart phone of Amazon comapany with the operating system named Fire OS. Fire OS  made from the Android Open Source Project (AOSP) and this is  different from Android. Fire OS also using on Amazon’s Kindle Fire devices.
You can make free calling from Fire Phone with apps which support this format. Applications are available on special app section on Amazon.com
Skype, Viber, UppTalk,  ooVoo, Nimbuzz,Viber,Talkatone and Tango are the main free calling apps which support Fire Phone for making free calls from smart phone.

We believe this article may useful to our readers to find application for make free calling from smart phone that loaded any operating system.